" The new preworkout formula is dangerously powerful! Dark Rage introduces a totally new EPO technology and an exclusive psychotropic stimulator for the most insane muscle pumps and intense workouts ever experienced. Dark Rage utilizes a patent-pending, dual action EPO-NO technology. EPO is a powerful hormone that actually allows you to make more blood by increasing red blood cell production and blood volume. Dark Rage stimulates the production of EPO in conjunction with NO boosters. This dual action forces the large volume of blood to be pushed through the wider vasodilated veins, causing a much greater pump than conventional NO boosters. Dark Rage contains a power exclusive psychotropic co-factor, beta-methoxyphenylethylamine, which stimulate the release of adrenaline and greatly increases mental focus and euphoria, to put you “in the zone. " 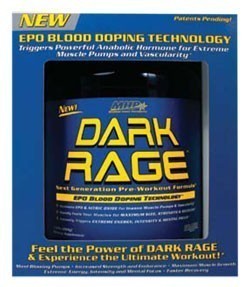 
" ... This stuff is potent. I bought a tub and started on it on a Thursday last week. I was getting ready for my bike ride and then a run on the treadmill and a littttle upper body at the gym while I was there.

So, I read everything, took a scoop, waited for that "instant result" and didn't really feel anything. So I grabbed my bike and headed down the steps. I hopped on and started my ride (20 mi short loop). About 1 mile in it hit me like a truck. I felt energy everywhere. My heart began to speed up or at least I became more aware of my heartbeat, my breathing didn't change much, my mind started racing (almost dizzying, I could not concentrate and just wanted it to stop), and of course.. my muscles felt ripped and ready for the craziest triathlon in history.

I started feeling extremely mad at everything. I was raging out of my mind and I wanted to kill someone by ripping their head right off their neck. It was very scary and very real.. I was out of control.

I began pushing myself to the limit on the bike. This wasn't just a bike ride anymore; I was ready to die pedaling this thing at 40mph straight up a hill for all 20 mi. It got more and more intense until it plateaued later at the gym.

I got to the gym, stretched, began my run, and finished it in record time. I felt unstoppable. I started my upper body lifting (which was just supposed to be some light stuff) and once again began pushing myself to the limit. I just couldn't stop. I was so mad and felt like I was in a trance. I was maxing out left and right on my chest workouts and doing crunches between everything until I came close to puking.

It was a great workout... BUT.. I felt out of place, out of my mind, insane, and scared for my heart health all at the same time.

As some others have experienced the cold chills, I did as well. They would come in right on the last few reps and made me break a little bit of a cold sweat.

So after the gym I went home and showered. I still had racing thoughts and it was almost dizzying at this point. I wanted it to stop so badly that I was pulling at my hair and yelling at myself (good thing I live alone.) At this point, it was about 11PM and I had finished my shower. I was ready for bed and went to take care of a few things on the computer.

I was still in that trance. I was sweating profusely as I sat in my chair and ended up getting stuck to it. I never need deodorant after my shower before bed.. but I was starting to really stink so I grabbed some.

Long story short, I was up until 5AM with racing thoughts and felt mentally shaky like a caffeine OD but I was not physically shaking. I had no other problems other than fluorescent yellow pee.. haha.

It all just sorta scared me the first time. I turned it back to half a scoop after I skipped a day and it wasn't as bad but I still had racing thoughts. So again I turned the dose back to 1/3 scoop and we were looking good today.. up until the evening.

I was driving home.. and suddenly I started raging out of my mind. There wasn't really even anyone on the road but I picked someone to try to really mess with and get angry. I don't know why.. I'm not this kind of person usually.. But anyways, I got this guy all worked up by passing him and then brake checking him, and then getting behind him and high beaming him to death. And then he retaliated with the same and it was on. I stopped, blocked him in, got out of the car, and was ready to kill this guy (literally, that was what was on my mind. I wanted to kill.) And he ran off (thank god) and later I realized I could have gotten in some serious s*** for what I did. I'm still a little crazy feeling.. but it's not as bad. This stuff is just madness and I hope these side effects wear off. I don't want to end up in jail, but I do like this stuff. "

Power and pain: The incredible lonliness of being superhumanly strong