Rezazadeh will not Take Part in 2007 World Championship

TEHRAN (Fars News Agency)- Two time Olympic and World weightlifting gold medalist Hossein Rezazadeh Saturday announced that he would not participate in the upcoming world championship in Thailand due to the minor injuries he sustained in a car accident last month. 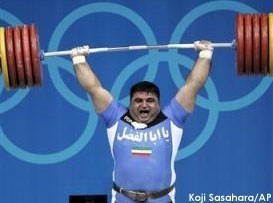 "Despite the fact that I am fully prepared, I should give up world championship in Thailand due the injuries inflicted on me in the car accident," Rezazadeh said in a letter addressed to the head of Iran's weightlifting federation on Saturday.

In his letter, the world champion reminded that he had continued his intensive exercises after the accident and intended to better his records in Thailand.

"But unfortunately the severe pain in my wrist does not allow me to harness heavy weights," he said, adding that he would not take part in the 2007 world championship in Thailand.

Meantime, Rezazadeh assured that once his injuries are healed, he would resume exercise to grab his third gold medal in the 2008 Beijing Olympic Games.

His injuries were caused during a car accident two weeks ago on the way to the weightlifting camp in northern Iran.

At the time of accident, Rezazadeh was accompanied by former world champion and his present coach Kourosh Baqeri and secretary of the weightlifting federation Jalil Amiri when Amiri, the driver, lost control of the car and crashed into the mountainous side of the road.

Reports said that Rezazadeh escaped the accident unhurt while Baqeri was left with minor injuries in his shoulder.

Rezazadeh and his companions left the crash site in Siah Bisheh on Tehran-North Chaloos road in a police car, which took them to the weightlifting camp in the northern city of Chaboksar.

Following the accident, the weightlifting federation said that Rezazadeh, the strongest man on earth, was fully healthy and had no problem for resuming exercise.

O
TRT in the Netherlands

Types Of High-Pressure Washers And Which One To Buy