Why HIT Is Total ****ing Horseshit

Why HIT Is Total Fucking Horseshit

*Why HIT Is Total ****ing Horseshit, Part 1
To begin, I believe that everyone is a highly unique individual, with varying work capacities and biological composition. This belief is founded in a great deal of science, ranging from the work of Roger Williams in "Biochemical Individuality" to a variety of other authors and anecdotal evidence, including my own experience. Mike Mentzer, however, thought that every single person is like a cog in some massive machine, and that human beings are essentially mass-produced organic machines, with interchangeable parts and identical biological functions and structures.

Everyone starts out with a VERY DIFFERENT work capacity based on a combination of nature and nurture, namely, how good their genetics are and how useful their parents were in raising a young Teddy Roosevelt.
[Afbeelding niet meer beschikbaar]

Your genetic capacity is based on a variety of things (don't even come at me with the ****ing somatotypes horseshit, as it's been addressed, and bodybuilders are the only ones who think that theory holds any stock whatsoever anymore) ranging from the size and arrangement of your internal organs to the composition of your muscle fibers.

Now, before you consign yourself to "hardgainer" status, note that you can change your body's ability to metabolize both nutrients and wastes, in addition to the number of mitochondria in your muscle cells, the thickness of the muscle fibers, and the thickness of your muscle attachments through a combination of good diet and extremely hard training. Additionally, one's capacity to handle hard exercise actually improves over time, so the more you do, the more you'll be able to do in the future. 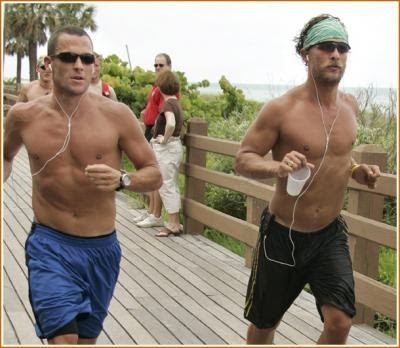 So, what was the nonsense Mentzer preached?

Mike Mentzer, for those of you who don't know, was a bodybuilder in the 1970s and 1980s who pimped Arthur Jones's Nautilus equipment and trained according to Jones's philosophies of tremendously short, brutally hard workouts. Jones himself was a tiny guy, with no appreciable muscle mass and no definable reason for believing that his system was the best, save for the fact that he apparently hated working out.

Jones took under his wing two up-and-coming bodybuilders, Casey Viator and Mike Mentzer. Viator won the Teen USA, Junior America, and Mr. America all in the same year, 1971, and later went on to take 3rd in the 1982 Mr. Olympia, his crowning achievement. For those of you who don't know, 1981-1983 were some of the sorriest years of the Olympia's existance, seeing the crowning of three fairly unimpressive Olympians amid a field of virtual nobodies (though Franco was kind of the shit, he beat a pack of nobodies). Mentzer came up around the same time, and was notable for simultaneously being a speed freak who rarely slept, a genetic freak, and one of the biggest ****ing crybabies in any sport ever, while at the same time hilariously espousing a drug-free lifestyle. After losing the 1980 Olympia to Arnold, he quit the sport and began misinterpreting Ayn Rand's Objectivism and applying his inane, drug-crazed ramblings to bodybuilding. 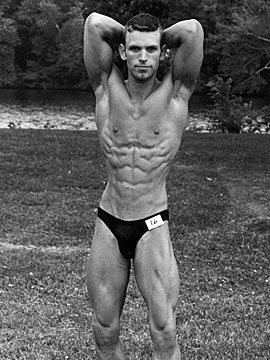 A high-intensity training advocate who apparently lifts in Auschwitz.

So, Mentzer was a ****ing whackjob, which we know right off the bat. But how whacked?

He applied Ayn Rand's "Art of Non-Contradictory Identification" (i.e. logic) to weightlifting. This theory hold that contradictions cannot exist in objective reality. Thus, there can only be ONE best system of weight training. Somehow, in Mentzer's drug-fueled ramblings, he failed to notice that the "best" is an entirely subjective determination. He believed, as an extension, that a contradiction is mistaken reasoning, which is amusing, because the fact that he lost to many, many bodybuilders who followed training regimes that were the total obverse of his own should have tipped him off to the fact that his conceptions of proper training and nutrition were retarded.

Mentzer believed:
1.That heavier training through progression took more of a toll on the body as one progressed. (Wisdom of Mike Mentzer p. 50) He apparently failed algebra, as had he done the math, he'd have recognized that 90% of a 1RM is still 90% of a 1RM, even when the RM increases drastically, and that training at that intensity takes the same toll on the body, no matter how low or high the RM (rep max).

2.That the more intense the workout, the shorter it should be. "For every slight increase in intensity, there has to be a disproportionate decrease in volume." (WMM p. 50) At the time, the Bulgarians were drastically increasing the volume of their programs, and began training up to 8 hours a day. Elite athletes found that the stronger they became, the more they needed to train in order to get results, rather than less, as Mentzer believed.

3.Mentzer believed that "intensity" was defined as "how hard you train", a completely subjective concept. Everyone else in strength training and physical culture knew (and know) that "intensity" describes the amount of weight used in relation to one's limit lift. Thus, 90% of one's 1RM (one rep max), is a far greater intensity than 60% 1RM.

4."The full completion of the recovery process may take anywhere from one day to a couple of weeks." (53 WMM) Sport science would disagree, claiming that individuals' training capacities may vary widely, but that most trainees recover in between 6 and 72 hours, depending on the volume and intensity of one's workout. He also thought that "up to 3 months might be required in order to recover from a high intensity workout for the biceps"(54 WMM) in spite of the fact that BROKEN BONES HEAL FASTER THAN THAT.

6."Anatomically and physiologically, every human being is essentially the same" (33 High Intensity Training), in spite of the fact that he believed in somatotyping, and the fact that it's been widely demonstrated that no two people are "essentially the same", exhibiting widely varying metabolisms, enzymatic processes, organ location and sizes, and muscle fiber compositions.

7.That one should consume massive amounts of carbs, and no more than 100g of protein a day! HAHAHAHAHA.

8.That one needs only to do one set for each bodypart to total failure every week and a half, though he regularly exceeded this volume by an order of magnitude.

8.Lastly, Mentzer believed that "the mind can alter any physiological system (200 HIT). This is hilarious, given the fact that he didn't believe that one's recovery EVER adapted to training, hahahahaha.

The verdict? Mentzer was a ****ing retard, and I'm glad he's dead. With any luck, his legions of HIT jedi will fade into obscurity (rot in hell Ellington Darden and Stuart McRobert), and we can all train like ****ing animals without hearing about "overtraining" and "hardgaining" ever again 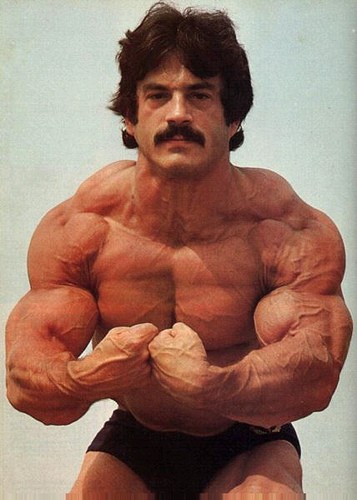 The badass physique of a drug crazed asshole, bold-faced liar, and bonafide retard.

O
TRT in the Netherlands