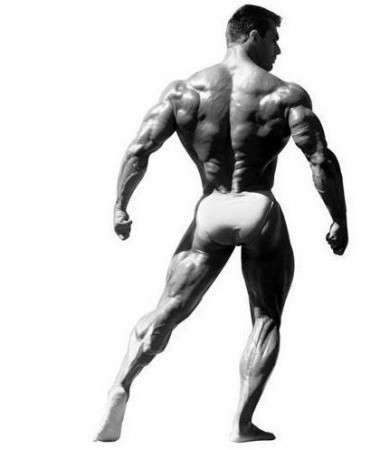 Last week’s web story featured Johnny Fuller and mentioned the pec tear he sustained in 1982. Therein lies a connection to Dutch star Berry DeMey who earned his pro card by winning the heavyweight division at the 1985 World Games.berry-one

The Flexing Dutchman was the glamour boy of bodybuilding back in the ‘80s, much in demand for front covers and appearances. In four Olympias (1985-’88) he was never out of the top six. Indeed, in his best ever shape, he stormed to third at the 1988 event and for 1989 even better things were predicted.

But back to Johnny. At Berry’s first Olympia in 1985 in Brussels Belgium he finished a commendable sixth ahead of stars like Tom Platz, Sergio Oliva and Bob Paris. In that same line-up making a comeback from a severely torn pec was Johnny Fuller who eventually finished 18th. Berry remembers viewing Fuller’s damaged pec, which sent a shiver down his spine. He told his younger brother, Jurgen, “I have nightmares about tearing a pec like that.” From then on, for some reason, it weighed eerily on his mind.

Berry calls the 1988 Olympia the best experience of his career and in the months afterward spoke at length of again capturing “That ’88 Feeling.” As befits his nationality, whose heritage is steeped in the work of the Dutch masters school of art, he looked upon bodybuilding as an artistic process in which one strived to create “The perfect picture” with your physique.

It was 10.59am on February6, 1989 and the third place finisher at the previous year’s Olympia, was in his beloved Body Shape Gym in Rotterdam, Holland, powering toward the climax of another chest workout.

Jan, his training partner called out, “200 kilos [440 pounds] Ber,” confirming the bench press poundage for his heaviest set. Berry was feeling good and allowed himself a slight smile. For the last month since starting his 1989 Olympia prep he could not believe the improvements he had made. The upcoming Mr. Olympia in Rimini, Italy, was over six months away but he had a vision. A vision that he was already there, already onstage, primed and pumped to shock the bodybuilding world. He had never felt stronger, never felt more confident that each rep was a stepping-stone to exceeding even his 1988 breakthrough Mr. Olympia performance. He knew Haney, Gaspari, Labrada and company would be pulling out all the stops, mindful of how he had showed up with bazooka like effect in ’88. Bazooka be damned – this time you’d hit the stage like a nuclear missile. The message was clear: those guys better be loaded for Ber.

He eased down onto the bench. As Jan lifted the bar from its stand he reached out to adopt a just wider than shoulder width grip, and took a deep breath and slowly released the bar to touch his chest. He pressed it out to arms length as Janberry-two announced, “One”. Four reps was the target -- three more to go. He felt strong, confident. It was just another day at the studio applying a few brushstrokes toward creating the perfect picture.

Berry took a deep breath as he prepared to execute the second rep of that fateful set of bench presses. His approach to training had always been to give 100 per cent and keep improving, keep getting better, keep getting stronger. To maintain that improvement curve over the years he perfected the art of going into a kind of a trance, of blocking everything out when handling maximum weights. In that mental vacuum it was him against the weight in a dog-eat-dog battle of gravity, and he certainly would not surrender to a mute bar. His approach was not cavalier; he knew the dangers. By constantly exploring and pushing the envelope he had to go into a place he had not been before. Many times he had hovered on the edge of his limits and prevailed. He had no doubts he would do so again. But that morning he was to learn that in moments of extreme trauma time slows down; a second can stretch and break into multiple segments as the consciousness tries to process in slow motion the descent into a nightmare.

As he began the second rep by releasing the bar to allow its downward motion all his energies – mental and physical – were concentrated on controlling the weight. With the bar halfway to his chest time went into slow-mo and he heard a tearing sound, like someone had ripped a newspaper in half. At the same time he was aware of losing power on the rightside and the bar jerking toward him. At that micro-second point he felt no pain but that wouldn’t have scared him. What scared him to the core, what made his heart freeze, was that awful ripping noise; he knew exactly what it was. The Olympia hopeful could almost hear the banshees wailing – his Johnny Fuller nightmare had become a reality. He had torn his right pec.

When that rep began he was fully in That ’88 Feeling/Perfect Picture zone. He was living and breathing those two components that personified and explained why he was a bodybuilder. As the bar lay on his chest, with the realization that the pec was torn, he knew his bodybuilding was all over. He didn’t need to hear the surgeon say, after he’d been rushed to hospital, “We’ll have to wait to see how it heals.” He didn’t have to wait the six weeks it took for the cast to come off to see the pec wasn’t back to what it was. He didn’t have to wait four months before he could get back into lower level training to know the power wasn’t fully there anymore. No, his whole career had been ruled by intuitiveness and as he lay on that bench he knew that at 26 years of age, bodybuilding – his version of it -- was over for him. He knew That ’88 Feeling would not happen again, that the canvas for the Perfect Picture had been as irreparably torn as the pec itself. And in that starkest moment of his life, feeling no physical pain but enduring a mental pain like none he had never known, it just hurt too much – much too much -- to cry.

Berry was never the same bodybuilder again. berry-threeKnowing his Olympia dream was over he joined the short-lived World Bodybuilding Federation (WBF), then returned to the IFBB with tenth at the 1993 Night of Champions and finished 15th at the 1994 Arnold Classic, his last contest.

He returned to Holland and took up photography and graduated from the country’s premier photography academy. Today, Berry is a successful photographer living in Nieuwerkerk, Holland with wife Marja (they’ve been together since 1985) and their daughter Noelle, who just turned 18. He has a thriving nutritional line: check out his website berrydemey.com. He trains several times a week and age 51 looks years younger.