Who gives a shit over die ****ing foto's

I'm kinda losing my interest in this sh*t... 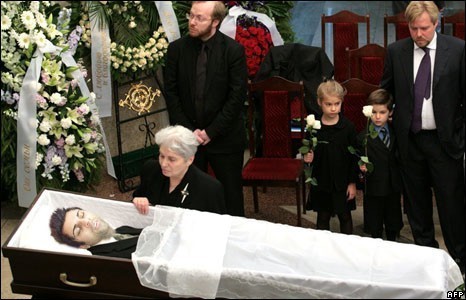 There was about 30 People, Aesthetics crew was there. (Chestbrah, babo, Philrayo, + about 5 others - turk was not there)

We all gathered around, and Said thanked everyone for attending.

He told us exactly what happened to Az, to get the story straight for a final time, and confirmed many things the media has said was untrue.

Az passed away due to an undiagnosed heart defect, his belonging's were not stolen and they were returned to the family.

Candles were passed around.

Said started telling story's of his brother and how not many people got to see the real Az.
Many saw the persona of charactor "Zyzz" but not the shy, humble person that Az really was.

Went on to say that he was so charismatic and just full of life, and no one could put him down.

Many of Az's friends spoke and told of similar stories, Babo was talking about how Az and him started training and how babo was "zyzz's little project" to make him Aesthetic..

They talked about Az playing WOW in school and being really skinny and just being a normal guy, and then he changed.

Many more stories were spoken about the true Az and how great of a person he was.

Said gave the opportunity for Miscer's and other people to say there respects.

Few people spoke about how Zyzz has inspired them to be better people and change as a person..
Also to not care about what others say and to do your own thing "Haters gonna Hate"

Candles were lit, and 1 minute of silence commenced.

Said also talked about how much Az respected people that he had inspired..
Sure he used to troll but that was just one of his persona's.. his goal was to change people for the better and when he heard stories of this, It grew his passion to train and help skinny phaggots.

After 1 minute silence, Said put on one of Zyzz video's for everyone to watch and mentioned that whenever he feels down he always puts on a Zyzz video and it lifts his spirits, as that's what Zyzz was all about.

Everyone paid respects to Said and went home.

RIP brah, respect to Said - you handled it so well mate, can't imagine the pain you are going through.

Cliffs:
Az Memorial at Blues Point
30+ People attended + Aesthetics crew
Said confirmed everything to clear up media lies.
Stories were told from family & friends about the real charasmatic Az and not the "Zyzz" persona.
Miscers and other's were asked to pay there respects.
Candles were lit, and 1 minute silence.
Video of Zyzz was played to all.
Final condolences to Said and everybody moved on.
A